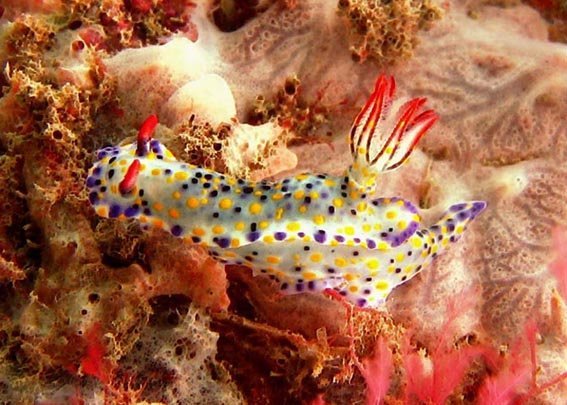 Nudibranchs, colloquially called “sea slugs”, are the candy of the sea. With over 3,000 described species – and counting –, the incredible variations in their colours and shapes seem like what would happen if a glass blower teamed up with a five-year-old. This makes them a delight for divers and a nightmare for scientists tasked with classifying them. They are found all over the world, but tropical shallow reefs like those of Timor Leste have the greatest diversity.

Nudibranchs are molluscs, but they lack the protection of a shell, so why would they display such a visible appearance? Well, many of them are poisonous, and the patterns warn potential predators of this, an adaptation called aposematism. Others, however, can blend in completely with the environment, looking like a piece of seaweed or coral.

Why are they called Nudibranch?

The name nudibranch refers to their “naked gills” which they wear on their backs. Some gills look like a flower or a plume of feathers; these type of nudibranchs are called dorids. The other type, aeolids, have a collection of sausage-like appendages called cerata, which serve as gills and can also contain poisonous sting cells.

Many nudis (as they are colloquially named) can swim, wriggling back and forth; this has earned the Spanish dancer its name. Despite their amicable appearance, they are predators, and eat all kind of animals from jellyfish larvae to sponges, or even other nudibranchs. Some can “steal” the sting cells and toxins from their prey and concentrate them in their bodies for protection. Others can even take in algae cells and get extra food from photosynthesis. 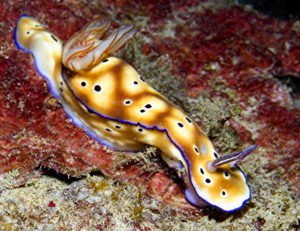 Dive Timor Lorosae has started cataloguing the amazing diversity in nudibranchs and other sea slugs (opisthobranchs) found in the waters of East Timor. In Dili alone, the site of Tasi Tolu is richly populated, with some species, such as the Spanish dancer, only showing up at night. Pertamina Pier and K57 are also nudibranch hot spots.

Don’t expect to see them all at once, though, because some can be as tiny as a couple of grains of sand, and are thus easy to miss even for the most hawk-eyed diver. The loss of colour associated with depth can also make them harder to spot. But if you’re an attentive observer, spending an hour underwater with your nose in the bottom can be very rewarding!