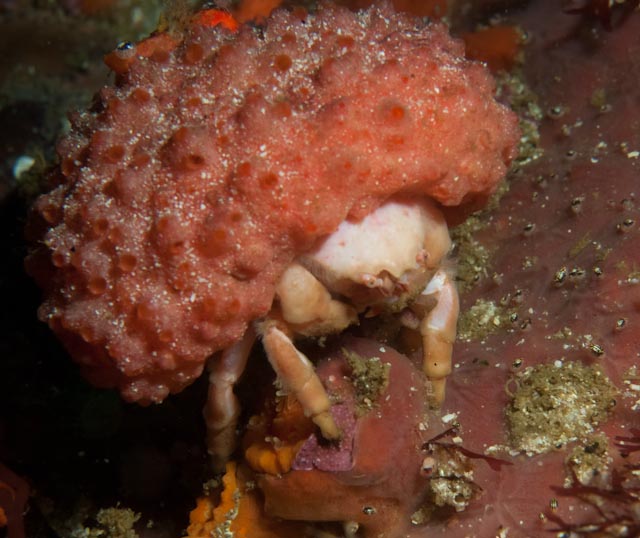 Alias, the crab that carries our cousins on his back

We are on a long, rewarding safety stop after a full 60 minutes dive, overwhelmed by the peaceful frenzy of so much nightlife, including nudibranchs, hermit crabs and a small family of banded coral shrimps. Now that: a blob like, orange-coloured fluffy object moving hectically between the coral bommies.

What the heck is that?? By a closer look, we can spot under that foamy, colourful cover a couple of claws. Is that a crab? Seriously? And what sort of stuff is that on his carapace? Getting a closer view, it really looks like an old relative of us.

Wait, what??? That foamy stuff?? Yes, that foamy stuff is a piece of a sponge, that the crab cut off from a larger sponge, and placed it on his carapace for camouflage purposes. Ok, it sounds already weird that a crab may cut off a sponge and use it as a hat to escape predators, but what does that sponge have to do with our relatives? To put it in a simple way, sponges are the most primitive animals on earth, and all animals evolved directly from an organism that was closely related to a primitive sponge.

How did it all begin?

Today we know, with a high degree of confidence, that life had its origin in the ocean over 3.5 billion years ago, most probably nearby some hydrothermal vent, where all chemical compounds necessary for life are available. The very early forms of life were just long chains of amino acids encapsulated in bubbles of lipids and capable of replication. Some of these primitive cells ended up merging into other primitive cells, exchanging chemical compounds and growing in size and complexity.

Throughout hundreds of millions of years, these unicellular organisms were the only forms of life existing on the planet. During such a long time span they kept evolving and diversifying, and some of them learned to use the energy of the sun to produce glucose, amino acids and fats, by a process called photosynthesis. Other unicellular organisms took advantage of the situation, learning to survive by swallowing those photosynthetic organisms. Some of them also learned to propel themselves through the water by spinning around a small hair protruding from their cell body, increasing in this way the odds of finding small photosynthetic organisms for breakfast.

Among them, a group of organisms called choanoflagellate found out the advantage of mutual collaboration: by joining in groups, they could specialise in different tasks: some individuals could take care of the propulsion, others could catch and digest the food, further ones could distribute the digested nutrients among all individuals of the colony. Staying together, living together, working together raised the chance of survival of each single individual. Those groups of primordial choanoflagellate constituted the first colonies of unicellular organisms, which gave origin to the very first, primitive sponge, which is a multicellular, semi-animal organism.

Is the sea sponge our ancestor?

Sponges display common set of features with all other animals, including humans: they are multicellular, heterotrophic (obtaining energy from food sources) and they can reproduce sexually, via sperms and “ova”. Another interesting observation is that sperm cells of all animals have a similar structure and biochemical features with the choanoflagellate cells, which suggests that the sperm cells evolved from some primordial choanoflagellate.

Does this imply that all existing animals evolved from sponges?

Not really, sponges have been indeed the first organisms that evolved from unicellular life forms, but they are not the only ones. The ancestor of choanoflagellate, currently extinct, gave origin also to other lineages, which led to other groups of multicellular organisms, among which ctenophores (comb jellies), cnidarians (corals, hydroids, anemone, jellyfishes etc.), echinodermata (sea stars, sea cucumbers, sea urchins, crinoids etc.), molluscs, crustaceans (including the funny sponge crab), emichordata (ascidians and salpas) and lastly chordata, which include fishes, reptiles and mammalians (including humans). Sponges therefore are not our direct ancestors, but some distant biological cousins.

Is the sponge-crab the villain of the reef?

The action of the sponge-crab may look like an act of underwater vandalism: ripping off a piece of sponge from the beautiful reef just to dress himself up, careless of the poor sponge. And what will actually happen to that poor sponge, after being chopped off in such a brutal way? Will it die? Not really. We need to remember that even modern sponges are the most primitive animals on the Earth, and they still preserve some of their original features. They are still formed by individual cells that are very similar to the choanoflagellate, and that are still capable of specialising in different tasks. Therefore if a piece of sponge is ripped off, we simply obtain 2 sponges, each growing and reproducing, independently from the other.

The sponge-crab keeps on using its sponge-hat until it grows to a size that is too large, and then it will either abandon it or trim it to a more convenient size. What then will happen to the small pieces that the crab has removed from its hat? Well, they will just keep growing, forming new sponges. So no need to consider the sponge-crab a villain: he is just a funny component of that incredible, kaleidoscopic jigsaw puzzle that is the coral reef ecosystem.