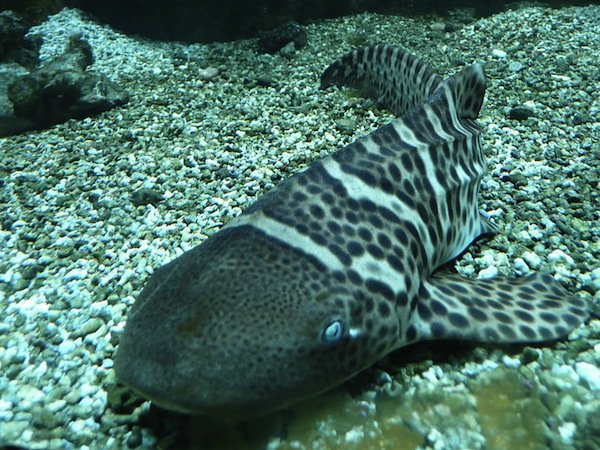 Known by most of us as Leopard sharks, these are one of Shark Guardian’s favourite sharks due to their beautiful colouring and friendly nature. An experience not to be missed as a diver is when you are able to get close to these sharks whilst moving slowly on the sea bed, as they rest on the sea bed too.

Unfortunately sightings of them are becoming more and more rare but we hope with some monitoring by divers, we can play a part of their come back.

Anatomy and Appearance There is no size difference between males and females and they can grow to a length of 3.5m, with its tail (or lower caudal fin to give it its proper name) making up nearly half of that length. It has small barbels on its snout, a small mouth, and small eyes. Its teeth are pointed, with each tooth having two smaller, lateral, flanking points. Prominent ridges run along its flanks. The name leopard comes from its’ adult appearance, the beautiful leopard print it displays. In our presentations we love showing the juvenile Zebra shark photos as you get an idea why really they are zebra sharks…

Habitat and Migration Found throughout the tropical indo-pacific region on sandy flats, in and around coral reefs, to depths of 62m, the zebra shark gets its name from the juvenile of the species which has a stripped pattern (see above!). Zebra sharks are more commonly known as leopard sharks in and around the Andaman Sea, but this is confusing as there is another species of shark called the leopard shark (Triakis semifasciata) found along the Pacific North American coast.

Life History They are solitary creatures although they do form large seasonal congregations of between 20 and 50, with females outnumbering males by three to one. The reason for this is unknown, although we do know it is definitely not for mating. In order to mate, males attract females by vigorously biting their fins! If he is lucky, the male is then allowed to mate with his chosen ‘victim’. 17cm long brown or purplish black eggs are then laid and attached to the substrate. The eggs can take between 4 and 6 months to hatch. When the young eventually appear, they are about 20-36cm long. They can live for up to 30 years.

Conservation They are preyed upon by larger fish and marine mammals. However, it is humans that provide the greatest threat to its existence. Their status with the World Conservation Union is ‘Vulnerable’ due to humans hunting them for their meat, fins and liver oil. Numbers are dwindling rapidly as they are an easy catch due to their relatively shallow habitat.

Docile and generally slow-moving, they are not dangerous to humans. However, they have bitten divers who pull their tails and try to ride them. In fairness, I would get upset if a stranger tried to jump on my back and ride me!