Shark of the Month – Thresher Shark

HomeBlogArchive2014Shark of the Month – Thresher Shark

Shark of the Month – Thresher Shark 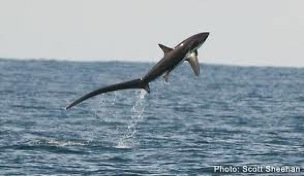 The latest Shark of the Month blog from Shark Guardian

There are 3 species of thresher shark and all tend to be solitary creatures. Although they do not appear to be a threat to humans there have been reports of divers being hit by their tail!

Anatomy and Appearance Its name derives from the greek word for fox. Its impressive caudal fin can be as long as the body itself. This is its main identifying feature and is easily recognized. It has a short head with a cone shaped nose and teeth of varying size. It has 5 gill slits. The largest species achieves 6m in length. Overall their colouration is a brown, blueish purple dorsally and a lighter shade ventrally.

Feeding They are known to follow large schools of fish, including tuna, bluefish and mackerel. They also eat squid and cuttlefish. Their tail is used to herd the fish, using it as a weapon to stun their prey by ‘slapping’ the water. The thresher shark is a very strong swimmer and are one of the few species known to jump fully out of the water, making turns just like dolphins do.

Habitat Found in all temperate and tropical oceans of the world, including the eastern and western Atlantic, central Pacific and Indo-west Pacific. Populations are separated by depth and space according to gender. Although they can be sighted in shallow inshore waters, they prefer the open ocean at maximum depths of 500m.

Reproduction The thresher sharks have no distinct breeding season, with litters usually of 2-4 pups and a gestation period of 9 months. They are slow to mature but can live upwards of 20 years.

IUTN Status Vulnerable This genus of shark is highly vulnerable to overfishing, hunted for their meat, liver oil and fins