Shark of the Month – Porbeagle Shark

Shark of the Month – Porbeagle Shark 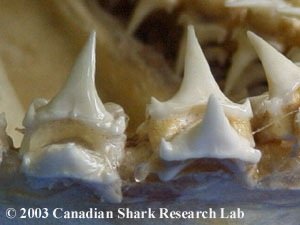 Shark of the month blog courtesy of Shark Guardian! With CITES (The convention on International trade in endangered species) fast approaching we thought we would focus on one of the lesser known sharks, but one which is in real danger of disappearing from our waters unless they get extra protection.

The large, warm-blooded porbeagle shark (Lamna nasus) is distributed throughout the temperate north Atlantic and southern hemisphere. It is a species of mackerel shark from the family Lamnidae which also includes white sharks. Demand for its large fins as well as its meat has driven populations to very low levels. Recent assessments show that because porbeagle populations have been severely depleted, it is unable to fulfill its key role in the marine ecosystem. Porbeagle populations are reduced by about 70 percent of their historical levels wherever they are found, and in some places declines are even steeper. For example, porbeagles have virtually disappeared in the Mediterranean Sea.

Anatomy and Appearance This shark typically reaches 2.5 m (8.2 ft) in length and a weight of 135 kg (300 lb); North Atlantic sharks grow larger than Southern Hemisphere sharks and differ in coloration and aspects of life history. Gray above and white below, the porbeagle has a very stout midsection that tapers towards the long, pointed snout and the narrow base of the tail. It has large pectoral and first dorsal fins, tiny pelvic, second dorsal, and anal fins, and a crescent-shaped caudal fin. North Atlantic sharks have 28–29 upper tooth rows and 26–27 lower tooth rows, while Southern Hemisphere sharks have 30–31 upper tooth rows and 27–29 lower tooth rows. One of the distinctive features of porbeagle sharks are its three-cusped teeth – each tooth has a strongly arched base and a nearly straight, awl-like central cusp, which is flanked by a pair of smaller cusplets in all but the smallest individuals. Other features which make it stand out from other sharks are the white blotch at the base of its first dorsal fin, and the two pairs of lateral keels on its tail. The eyes are large and black, without nictitating membranes (protective third eyelids).

Habitat and migration The porbeagle inhabits water down to a depth of 1360 meters (4,200 feet) and favors water temperatures of 5 to 10 °C (41 to 50 °F), though it has been reported across a temperature range of 1 to 23 °C (34 to 73 °F). They have a heat regulating system that raises the body temperature several degrees above the water temperature, which allows it to live efficiently in the cooler waters it inhabits. Seasonal migrations have been observed in porbeagles from both hemispheres and it is believed the migrating sharks may travel upwards of 2,300 km (1,400 mi), though once they reach their destination they tend to remain within a relatively localized area. The shape of the shark plus the extra keels on its tail give it the ability to swim these huge distances and also give it extra power, making it one of the fastest sharks.

Feeding and habits This stocky shark is often included in studies on whether or not sharks play. That is because several observers have reported seeing porbeagles in groups of up to 20 individuals manipulating and tossing about floating objects, including lumber and seaweed. They seem to engage in such activity for no apparent reason other than to pass the timel! The porbeagle shark mainly feeds on schooling fish, such as mackerel, herring, cod, hake, lancetfish, redfish and haddock. It will also consume shellfish, smaller sharks (e.g., some dogfish species) and squid. The side projections on the teeth of adults help them to gnash through tough prey.

Conservation Populations of the porbeagle have been severely depleted around the globe. The International Union for the Conservation of Nature (IUCN) Red List of Threatened Species assessed the porbeagle as Vulnerable globally, Endangered in the northwest Atlantic and Critically Endangered in the Mediterranean and northeast Atlantic. The porbeagle falls into the United Nations Food and Agriculture Organization’s (FAO) lowest productivity category, meaning it has an extremely low reproductive capacity and thus is particularly vulnerable to overexploitation. It is also one of the ocean’s most vulnerable species. Although CITES recommended additional conservation actions for the porbeagle, the proposals to list the species in 2008 and again in 2010 were rejected. We really hope that at this years CITES meeting this amazing shark finally gets the protection it deserves and we can start to witness a rise in number over the coming years.