Shark of the Month – Oceanic Whitetip

Shark of the Month – Oceanic Whitetip 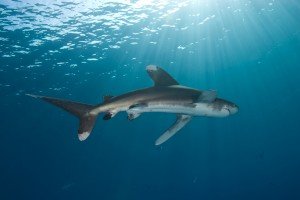 Last month Shark Guardian told us about the porbeagle shark as it was 1 of the 5 shark species to be discussed at CITES (The Convention on International Trade in Endangered Species) this month, possibly to go on to Appendix 2.

Well as we’ve been keeping you up to date about this you will all know all species were successful! So to continue this vibe, Shark Guardian brings you one of the other successful sharks: the Oceanic Whitetip!

Considered one of the 5 most dangerous sharks in the world, they can grow to nearly 4 meters in length and are named because all its rounded fin tips are white or show mottled white patterns.

Anatomy and Appearance The oceanic whitetip has a stocky build, a short, bluntly rounded snout and incredibly powerful jaws. The fins are significantly larger than most other shark species (hence the demand for their fins which is driving them to extinction).

Features of an Oceanic White Tip The aggressive but slow moving fish dominates feeding frenzies with its amazing teeth – the lower jaw are relatively small and triangular with a thin serrated tip (like fangs!) whereas the larger upper teeth are triangular and broader with entirely serrated edges. It grips it’s prey with the sharp lower jaw and then uses the strong, upper serrated teeth to saw and slice the flesh. No wonder they are a danger to shipwreck and air crash survivors!! The female is typically larger than the male and young Oceanic whitetips may have black fin tips until they grow to about 1.3 meters. There may also be a dark, saddle sharped marking between the dorsal fins. Most only grow to around 3 meters maximum but the largest ever recorded was 4 meters. Depending on geographic location the body colour may be brown, grey, beige or bronze, sometimes bluish, while the stomach is usually white with an occasional yellow tint. They have circular eyes and are in the family group which do have nictitating membranes which help shield the eye when they hunt and eat.

Habitat and Migration The oceanic whitetip is found globally in deep, open water, classed therefore as oceanic epilagic. They prefer warmer waters between 20 and 28 degrees centigrade, spending most of their time in the upper layer of the ocean, but often spending time at depths of about 150 meters. They were once extremely common and widely distributed but numbers have declined commonly over the past years. They can be can be found from Maine, U.S., south to Argentina in the Western Atlantic Ocean, including the Caribbean and Gulf of Mexico, and from Portugal to the Gulf of Guinea, in the Eastern Atlantic, possible including the Mediterranean. In the Indo-Pacific, this shark inhabits waters from the Red Sea and East Africa to Hawaii, Samoa, Tahiti and the Tuamoto Islands. In the Eastern pacific the distribution includes waters from southern California, U.S., south to Peru, including the Galapagos.

Diet The diet of the oceanic whitetip shark primarily consists of bony fishes such as tuna and mackerel, but also includes stingrays, sea turtles, sea birds, squid, crustaceans, dead whales and dolphins and occasionally even rubbish that is disposed in the sea. The species is usually solitary, cruising near the top of the water column, covering vast distances, searching for food sources. They will occasionally congregate in groups during ‘feeding frenzies’ where food is plentiful, such as around whale carcasses.This seems to be triggered not by blood in the water or by bloodlust, but by the species’ highly strung and goal-directed nature (conserving energy between infrequent feeding opportunities when it is not slowly plying the open ocean). The oceanic whitetip is a competitive, opportunistic predator that exploits the resource at hand, rather than avoiding trouble in favour of a possibly easier future meal. However, if other shark species are encountered competing for the same food source, the oceanic whitetip shark usually dominates over them, and may become aggressive . This shark is often accompanied by remoras, dolphin fishes and pilot fishes, and reportedly demonstrates an unusual association with the shortfin pilot whale in Hawaiian waters . Although the exact reason for this shark swimming along with pods of pilot whales is unknown, it is suspected that oceanic whitetip sharks are following them to sources of squid, which the pilot whales are extremely efficient at locating.

Life History Reproduction is viviparous, with live young being born after being nourished by a placental yolk-sac that is attached to the uterine wall by umbilical cords. Gestation period is about 1 year with litter sizes varying from 1 to 15 pups. Sexual maturity is attained at an age of six to seven years for both sexes.

Conservation The oceanic whitetip shark suffers from fishing pressure throughout most of its range, with large numbers being caught as by catch by tuna and other pelagic fisheries. The shark’s large fins are highly prized in international trade, being sold to the Far East to make shark-fin soup, but the remainder of the carcass is often discarded. Although classified as Vulnerable overall, this species has been assessed as Critically Endangered by the IUCN in the Northwest and Western Central Atlantic, due to massive declines in reported catch quantities indicating significant population declines. A study in 2003 showed that numbers were estimated to have dropped by as much as 70% in the Northwest and Western Central Atlantic between 1992 and 2000. Another study focusing on the Gulf of Mexico, using a mix of data from US pelagic longline surveys from the mid-1950s and observations from the late-1990s, estimated a decline in numbers in this location of 99.3% over this period. However, changes in fishing practices and data collection methods complicate estimates. Catches in international waters elsewhere are often inadequately monitored, and there is simply insufficient data to asses the real impact fisheries are having. As a result of these findings its status on the IUCN red list was moved to “Vulnerable” globally (from “Lower Risk/Near Threatened”) and “Critically Endangered” in the Northwest and Western Central Atlantic areas. Its move on to CITES Appendix 2 is a great step for this shark species which, although once thought abundant, is now on a rapid decline in our oceans.

We hope that increased awareness surrounding this shark will help its recovery.