Shark of the Month – Megamouth Shark

HomeBlogArchive2013Shark of the Month – Megamouth Shark

Shark of the Month – Megamouth Shark 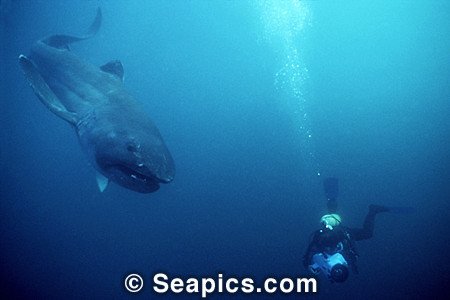 Blog brought to you by Shark Guardian – Megamouth Shark Order � Lamniformes Family � Megachasmidae Genus – Megachasma Species – pelagios Taxonomy – When the first megamouth was captured in 1976, a new shark family, genus and species had to be erected. There are conflicting phylogenetic hypotheses regarding the evolutionary relationships between the Megachasmidae and other shark families. One theory suggests that the Megachasmidae is evolutionary derived and form a monophyletic family with basking shark, Cetorhinidae. Others disagree with this idea and suggest that the Megachasmidae is relatively derived and forms a sister group to the Cetorhinidae, Lamnidae (mako, white and porbeagle sharks) and Alopiidae (thresher sharks). Recent studies suggest that Megachasma pelagios is the most primitive living species within the order Lamniformes, which contains all the aforementioned families, and has independently evolved the filter feeding mode, shared with the basking shark, Cetorhinus maximus. Geographical Distribution – Although only 49 confirmed sightings (plus 1 unconfirmed sighting) of megamouth shark are reported, this species is now known from Indian, Pacific and Atlantic Oceans. As with the two other filter-feeding sharks, the basking and whale sharks, this species is wide-ranging. However, the megamouth is considered to be less active and a poorer swimmer than the basking or whale sharks. Poor mobility likely is a reflection of its flabby body, soft fins, asymmetrical tail, lack of keels and weak calcification. Habitat – As its species name (pelagios, the Greek word for �of the sea�) suggests, the megamouth lives epipelagicly (in the upper part of the water column) in open ocean. Although only few sightings of megamouth have been reported, the capture of the 6th megamouth was very important in augmenting our understanding of the ecology of this species. This specimen was tagged and followed for two days, allowing insight into its habitat preference and behavior. It remained at a depth of 15m during the night, then dove to 150m at dawn and returned to shallow waters at dusk. So the megamouth is presumed to be a vertical migrator on a diel cycle, spending the daytime in deep waters and ascending to midwater depths at night. Behavior – Only two observations of megamouth provide information about this species behavior. The 6th specimen from Dana Point, California (21 October 1990) offered the most important insights into the behavior of this species. The male specimen, with 494cm in total length, was tagged and tracked for two days. One of the conclusions of these observations is that megamouth is probably a vertical migrator on a diel cycle spending the daytime in deep waters and ascending to midwater depths at night. This vertical migration may be a response to the movements of the small animals on which it feeds. The krill that make up part of megamouth�s diet are known to migrate from deep waters to the surface. Megamouth, in contrast to many other deep-water sharks, shows a decrease in specific gravity in the form of a soft, and poorly calcified cartilaginous skeleton; very soft, loose skin; and loose connective tissue and muscles. Others epibenthic (live in the water just above the bottom) and epipelagic sharks often have an enlargement of their abdominal cavity and increased liver volume. The huge liver allows for greater production of liver oil in order to reduce specific gravity and increase hydrostatic support. The 13th sighted also offered important megamouth behavioral observations. This sighting documented sperm whales attacking megamouth shark. Observers reported that the megamouth was swimming slowly and apparently confused at the surface. The shark showed signs of the whales� attack, on the base of its dorsal fin and gills. Reproduction – The megamouths II and VI were both mature males, and both showed evidence of recent mating. The claspers of megamouth II were oozing spermatophores and those of the sixth specimen were abraded and bleeding, a common occurrence in sharks that have just mated. The 6th megamouth also had a fresh wound on the lower jaw, a feature found in other sharks that grasp one another�s mouth during mating. Megamouth II was taken in late November and megamouth VI in late October, these factors make scientists believe that Southern California might be a mating area for megamouth sharks in the fall. The claspers of the first captured megamouth were fully described. Its claspers were relatively slender, with tip elongated, forming a very narrow, slender process. The 7th megamouth observed, a female with 471cm in total length was heavily studied and one of the conclusions is that this specimen is immature. This judgement was based on uteri that were enlarged only posteriorly, a poorly developed ovary and ostium and the small size of the oocytes. The ovary of the megamouth is similar to other mackerel sharks and this suggests that megamouth embryos are oophagous (the first well-developed embryo eats the other eggs in the uterus). The 12th megamouth captured is the only known mature female. The total length of this specimen was 5.44m and the expanded uteri measured 260mm. The right ovary possessed a large number of whitish yellow eggs. Conservation – Due to the lack of information concerning distribution and population status, the megamouth is considered �Data Deficient� by the World Conservation Union (IUCN). The IUCN is a global union of states, governmental agencies, and non-governmental organizations in a partnership that assesses the conservation status of species.