Shark of the Month – Lemon Shark

HomeBlogArchive2014Shark of the Month – Lemon Shark

Shark of the Month – Lemon Shark 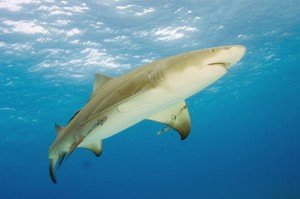 The latest Shark of the Month blog from Shark Guardian

Found in sub tropical and tropical waters in the Atlantic and Pacific oceans, the lemon shark can grow to approximately 3 metres in length and weigh approximately 90 kilograms. It is from the Carcharhinidae family. There are 57+ species in this family that includes the more popular known Reef and Tiger sharks.

The lemon shark is aptly named from its body colouration, a soft yellow with white on its belly. This provides a great camouflage for this bottom dweller to hunt its prey of an assortment of bony fish, stingrays, crabs, crayfish and smaller sharks. There are a few interesting characteristics for lemon sharks, they can adapt to different salinities, their 2nd dorsal fin is as large as their first and they have extremely strong electro-receptor abilities in their snout and generally use this as their guide in hunting as their eyesight is very poor.

Females give birth to live young every other year, in shallow nursery waters, up to 17 pups at one time. The lemon shark fends for itself from birth and will stay in the shallow waters until they grow larger. They do not reach sexual maturity for 12-15 years and the average lifespan is only approximately 25 years.

The choice of habitat of the lemon shark may be its worst enemy for two reasons. They are generally found in shallow to moderate depth (92 metres) mangroves, estuaries and coral reefs so although it is being hunted for meat and shark fin soup; coastal development and the destruction of the mangroves is its biggest threat. Secondly, the Lemon shark has been found to have a very high survival rate in captivity possibly lessening the responsibility to ensure its natural habitat is preserved.

The IUCN class the lemon shark as vulnerable and in South East Asia it is endangered. This is believed to be due to the widespread destruction of coral reefs and mangrove habitats as mentioned above.