Sex Change in the Underwater World

Sex Change in the Underwater World

During the past few decades a large debate concerning gender identity and sex change has been raised in the western world, involving many different sectors of our society: politics, medicine, psychology, physiology, philosophy, religion etc. The presence of transgender people has been recorded in all societies worldwide since ancient times, and while certain cultures maintained a tolerant attitude towards them, others promoted discriminative behaviours, right up to open ostracism and persecution enforced by the law.

Promoters of discrimination argue that sex change violates the fundamental laws of nature and as such it should not be tolerated. But what happens in the real natural world? Well, in the ocean sex changes naturally happen everywhere and all the time. 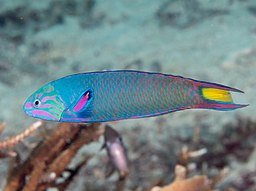 As scuba divers, we often admire the stunning variety of vivid colours of many reef fishes: parrot fishes, wrasses, angel fishes, butterfly fishes etc. Among many of those fishes, the males display brighter colours than the females. This happens because the females choose the most colourful males as mating partners (physical attraction is important also among fishes!). Those males with the genes that give them the brightest colours therefore have more luck with the ladies, and succeed in transmitting their genes to the next generation. As the final choice of the partner is totally up to the females (any parallel with the human world?), female fishes do not need to display as bright colours as the males. The most beautiful colours therefore seem to be an exclusive privilege of males.

This seems a case of sexist discrimination operated by nature, but is it really? Not at all: every female will have, soon or later, the chance of wearing the most stunning colours as well. How? Just by turning into a male, as it happens with many species of wrasses, parrotfishes and other reef fishes.

Even more options than in the LGBTQ+ community!

To understand a bit better the sex change process, we first need to acquire a broader perspective of the diversity of options, which covers all possible variations we can think of. In some species, sex is genetically determined and maintained during the whole duration of their life cycle (gonochorism). In other species, both males and female reproductive organs (testis and ovaries) are simultaneously present in each individual during the whole duration of their life (simultaneous hermaphroditism).

In others, all individuals are born with one sex, which they change in an irreversible way at a certain stage of their life (sequential hermaphroditism). In other species, individual fishes can perform a sex change several times during their lifetime, swapping back and forth from one sex to the opposite one (bidirectional hermaphroditism). Moreover, most species of fishes can change sex at embryonal stage in function of environmental factors such as water temperature, pH, presence of pollutants, etc.

Why so many sex change options?

Why does sex change happen? And why such a variety of options? The answer is rooted in one simple fact: evolution.

So what kind of environmental conditions may have driven certain fishes to develop features such as simultaneous or sequential hermaphroditism? If food resources are scarce in a certain environment, resource consumers need to spread over a vast area in order to survive. Meeting other individuals of the same species and of the opposite sex for mating therefore becomes a rare event under these circumstances. In this case, simultaneous hermaphroditism (both sets of reproductive organs) is an objective advantage in terms of increasing the chances of transmitting one’s genes to the next generation.

When fishes do not exert an active care of their eggs, the amount of eggs laid is the most important factor for guaranteeing reproductive success. In this case there is a clear advantage in having larger sized females than males, as this facilitates the laying of a greater amount of eggs. As fishes keep growing in size throughout their whole life (differently from humans), female fishes can be larger than the males only if males turn into females at a certain stage of their lifespan.

When reproductive success instead depends on the active defence of the nest and eggs by means of the brute force displayed by territorial and aggressive males, it is more advantageous to have larger sized males than females. In this case the transition from a small female into a larger male is more favourable for the purpose.

How does all this happen?

Now that we know “why”, we can try to answer the question “how”. How does a fish suddenly change sex? And what triggers the change?

Also in this case we observe a broad variety of options. In some case, the triggering factor is purely genetic: upon reaching a certain age or a certain size, fishes are genetically programmed to change sex, so sex change naturally happens at that specific stage of their life.

In other cases, the triggering factor can be environmental, or social, or both. Certain wrasses live in groups composed by several females under the control of a territorial and protective male. If the male suddenly disappears, as when eaten by a predator, the largest female starts developing male traits and behaviours, and within less than 2 weeks she completes the transition, including the full development of male reproductive organs, after the suppression of the female ones.

Experiments conducted in a controlled environment, studying the different stages of the transition, suggest that the triggering factor for the transition is the stress caused in the group of females by the sudden disappearance of the male.

Nemo: the story that wasn’t told: 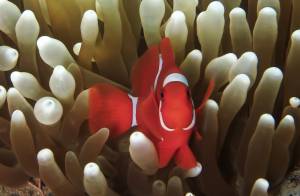 Sex change from female to male, called protogyny, is much more common in the fish world than sex change from male to female (protandry). There are anyway a few notable representative of this second option as well. Perhaps the most notable example of it are actually the anemone fishes (clown fishes), as they are all sequential hermaphrodites in the protandry mode (irreversible sex change from male to female). The factor that triggers the change is purely social. The anemone fish society is in fact strongly matriarchal: in each anemone there is only one large female, which rules over all the younger, smaller males. The way the female controls the males is quite tyrannical: if any young male starts displaying any female trait or behaviour, the female, queen of the anemone, attacks him and bites him until he stops it and submissively recedes to his lesser role of young male. However if the female suddenly disappears, as when eaten by a predator, all the males engage in a savage war of all against all, by means of bites which leave visible scars on their fins and bodies.

The eldest and larger male normally manages to subdue all the other males, and at that stage he peacefully transition into female, sure enough that no other male will disturb him while he enjoys the process.

Once the transition is over, she will start mating with some of the younger males that he previously subdued by means of bites, when he was still a male himself. The main fact that makes “Searching Nemo” quite unrealistic therefore is the tale of Nemo’s dad getting so stressed and worried about Nemo having turned into a motherless child. In the real world, Nemo’s dad would simply chill out and turn into Nemo’s second mother, so the whole story would end right there, without so much of a drama.