Sea Snakes – To Fear or Not To Fear…

HomeBlogArchive2014Sea Snakes – To Fear or Not To Fear…

Sea Snakes – To Fear or Not To Fear… 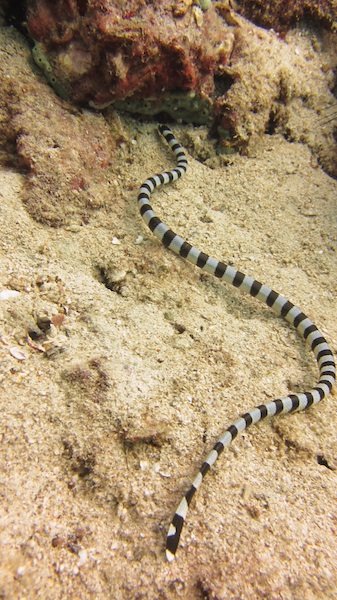 Lately, after a number of sightings of sea snakes, we had the debate about how dangerous these graceful creatures really are and here is what we found.

Sea snakes are highly venomous. They paralyse their prey by biting them and injecting venom. Their venom is amongst the most potent in the animal kingdom with one bite producing 10-15mg of toxin in which only 1.5mg is fatal to humans.

So why are we not more concerned about that sea snake when she comes gliding towards us slipping in and over the corals?

To date there are no reports of unprovoked attacks on any, divers, snorkelers or waders. Although curious, sea snakes care little about divers. This may be due to their main food source being smaller animals such as gobies and garden eels. And as sea snakes do not spend anytime raising their young they do not display aggression to protect their young like many other species.

A few other facts we found interesting:

There are approximately 50 species of sea snakes
Generally sea snakes give birth to a dozen young as opposed to their terrestrial counterpart who deliver approximately 40 young
Some species give birth to live young
Only 6% survive to the sexually mature age of 18 months and very few reach a full life of 4 years.
Many sea snake populations in South East Asia have diminished considerably due to the demand for their meat in the Chinese market and there skin in the fashion world.
Sea snakes have valved nostrils that close over to prevent water entering while diving
They generally last between 20-30 min underwater before needing to surface to breath
Sea snakes generally hunt during the day
Females are always bigger than the males
Sea snakes can grow up to 2m in length

Most sea snakes are relatively helpless and unable to strike on land Despite not having to fear these creatures, they should be respected and treated with great respect as when captured, hooked, netted, frightened or harassed they will attempt to bite.

If you are in Timor Leste and want to see one of these beautiful creatures, try diving at Pertamina Pier where they are often sighted searching for food.