Feel Safe to Dive in Timor as there are Non Letal Jellyfish.

HomeBlogMarine creaturesFeel Safe to Dive in Timor as there are Non...

Feel Safe to Dive in Timor as there are Non Letal Jellyfish. 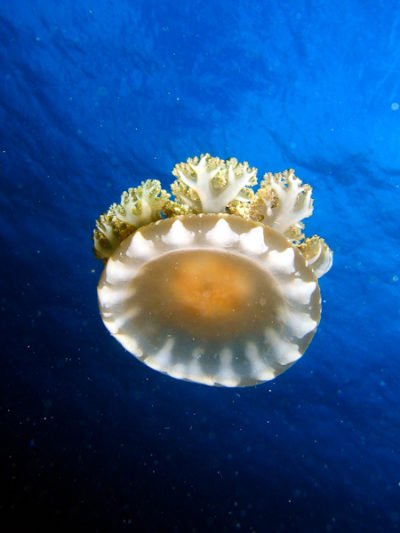 Jellyfish Jellyfish are part of the Phylum group Cnidarians.

This is a widely diverse group that include hard and soft corals, anemones, hydroids, sea fans and gorgonians etc. Despite the diversity they all have a basic body plan, with larvae transforming into either polyps (sedentary) or medusa (free swimming) and sometimes both throughout their lifecycle.

They consist of a soft body with tentacles clustered around a central mouth. Some form colonies and others can remain as individuals. The tentacles have specialised stinging cells called nematocysts or cnidocytes that fire on contact with an organism. This is used to capture prey that depending on the species can vary from tiny microscopic plankton to crustaceans and fish.

Jellyfish is the common term for cnidarians of the free swimming form and are found in oceans around the world and in freshwater systems. There are many different types of jellyfish.

One of the most common species found in some of the local dive sites is the funny looking Upside Down jelly Fish, often seen in Tasi Tolu, this particular Jellyfish spend the days rolling at the bottom opposite than swimming in middle water as its relatives.

Very few species can affect humans; however contact with some types can result in painful stings. Some species such as box jellyfish and irakunji can inflict very painful stings and have caused death.

Thankfully neither of these is found in the tropical waters around East Timor!

Hydrozoans are a class of cnidarians and can have both polyp and medusa forms. Some of these such as fire coral are common on reefs and can have various appearances depending on the species.

Many species can result in painful stings although not life threatening. Some have a feathery appearance and can protrude upwards from reef surfaces and are effective at reminding divers not to touch and to maintain good buoyancy control. Portuguese man of war are a free swimming (medusa) species of hydrozoans and can result in painful stings. Although they are not common around Dili, some have been found around waters off Jaco Island.

Be happy and go diving!