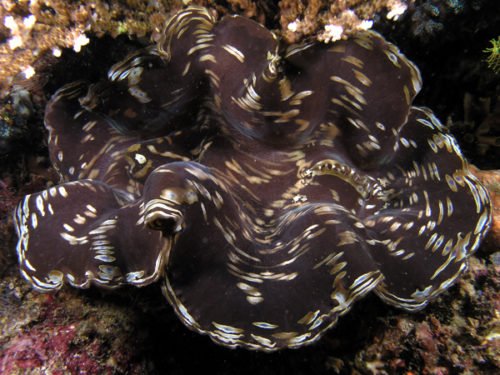 A careful search of most dive sites in Timor Leste  will yield the discovery of a giant clam or two, but many divers may not know that they are lucky to see this ancient (appearing in the fossil record as far back as the Cambrian period, 500 million years ago) bivalve, as many species are endangered-to-extinct in certain Asian countries!

Areas where there is little commercial fishing (Timor Leste) still have intact populations of giant clams, as local fishermen rarely harvest beyond what they can consume or immediately sell without refrigeration. In these cases, the majority of the clam is generally used as well, eating all of the meat and purposing the shells for bowls, pots or even baby bath tubs!

Commercial fishing often takes the parts that are considered delicacies in certain Asian markets (Japan, and China as an aphrodisiac) and France and discard the rest. Giant clams are now thought to be extinct in the Philippines and areas surrounding Taiwan.

Giant clams are hermaphrodites, allowing them to produce both sperm and egg. They also live to a very long average life span of 100 years. This can be a problem for maintenance of the species though, as an individual must mature to a relatively old age to develop its female reproductive capabilities.

As a filter organism, clams and other bivalve molluscs have also been used experimentally by marine scientists to measure pollution levels and types in certain areas.

These organisms have a tendency to accumulate heavy metals, and other organic pollutants present in the water, as their enzyme systems are not capable of metabolizing them. This can be harmful to the mollusc itself, and any human who eats it, but useful to science.

So the next time you pass over a colourful giant clam while diving in Timor Leste, consider this knowledge of its rarity, age, and usefulness to humankind to enhance your diving experience!